It seems Rangers could be close to signing Paulinho from Portuguese Second Division side Gil Vicente, at least according to the Portuguese press.

As reported by O Jogo today, the Glasgow club are interested in the winger whose contract in Portugal will be expiring at the end of the season.

A couple of weeks after taking charge of the club, Portuguese manager Pedro Caixinha is working on his list of signings for the next season and Paulinho would be one of the Ibrox targets.

O Jogo point out that Paulinho and Caixinha share the same agent, with the deal being relatively easy for Rangers to complete.

The player would also have offers from Portugal’s top division, but the opportunity to join the Rangers and Caixinha would be his preference for now. 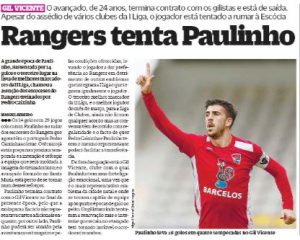 Paulinho is the third highest scorer in his league, with 14 goals this season. Although Gil Vicente’s intention was to renew their captain’s contract, the player has already told them he’s not doing it as he seeks a bigger challenge.

It’s curious that O Jogo have their article just a day after English website HITC suggested Paulinho could be a good fit for Rangers and Caixinha. This could be the Portuguese press getting a little over excited, at least at this stage.