Nottingham Forest are reportedly working to get Bruno Varela from Benfica as soon as possible.

According to Portuguese newspaper Record today, the Championship side are currently ‘closing the siege’ for the goalkeeper, having made recent contacts to accelerate the process.

The outlet sounds pretty optimistic about the deal, as Forest’s board believe it could be done in the next few days.

What could make things easier is that Benfica will be spending a few days in England next week. The club will be hosted at St. George’s Park for their preseason between the 15th and 20th of July, and Record points out that with a one-hour drive to Nottingham, things could be solved. 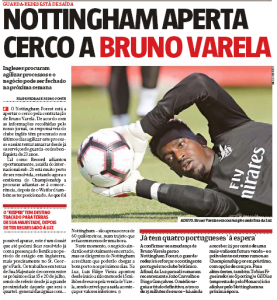 The newspaper doesn’t know exactly how much Nottingham Forest would be paying for Varela.

They just say that the Benfica president Luis Filipe Vieira has demanded €15m for the transfer, and it could still be done for a little less than that.