It looks like Nottingham Forest and West Bromwich Albion have very different ideas on what to do with their loanees from Benfica this summer.

Portuguese newspaper Record has a story today about all players who could leave the Eagles at the end of the season, and many of them have been at Championship sides.

Nottingham Forest had Alfa Semedo since the start of the season, in a deal which didn’t include a buying option for the English side.

And according to Record, despite the midfielder’s 24 appearances for Forest this season, the club aren’t making an attempt to keep him this summer. They’re letting him return to Benfica. 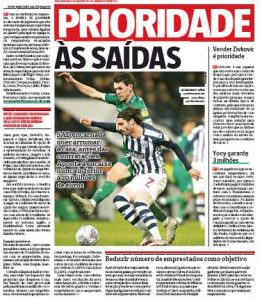 This isn’t the case with Filip Krovinovic. Even though West Brom don’t have a buying option either, they should try to keep the midfielder by making Benfica an offer.

Record says the Baggies are thinking about putting €10m on the table. Although the purchase isn’t guaranteed, that’s the biggest fee Benfica would get for a loanee this summer.