A list of Championship clubs are in the race for Sporting midfielder Bruno Paz, according to claims from Lisbon today.

Newspaper Record says Brentford, Nottingham Forest and Reading are all interested in the 22-year-old.

Even though there’s no detail on how talks between these clubs have been going, the outlet claims that the Lions have been ‘aware’ of this interest from England.

It’s said that Sporting have left a clear message for all clubs who are involved. The Lisbon side want at least €3m to let the player go, and will keep 30% of a future sale. 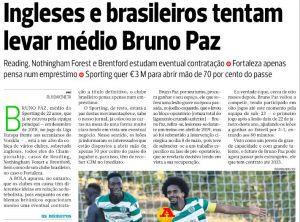 Brazilian side Fortaleza are said to be the fourth club in the race. However, since they only want the player on a loan deal, that leaves them behind the Championship sides.

Bruno Paz has only one appearance for Sporting’s first team, which happened in December 2018. He suffered a serious knee injury last year, and after going through surgery, he’s only featured for the Lions’ reserves and U-23 squads.

So even though Brentford, Nottingham Forest and Reading can probably afford such signing, we wonder what really convinced them to go after this player.