The Portuguese media continues talking about the situation of Filip Krovinovic, as his future seems quite unclear at this stage.

The Benfica midfielder is having a loan spell at West Bromwich Albion, but due to the lack of playing time, he’s expected to switch clubs this month.

There are two stories from local newspapers today. One of them comes from O Jogo, who say Nottingham Forest have now joined the race for the midfielder.

The outlet claims that the ‘echo’ of  interest from three clubs has now got to Benfica, who are evaluating the situation. Besides Nottingham Forest, PAOK and Olympiacos are trying the signing as well. 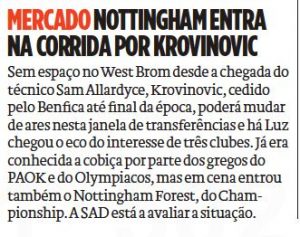 Meanwhile, newspaper Record talks about the situation of several loanees, and when speaking of Krovinovic, they say he has the exit door ‘open’ at West Brom. The interested clubs mentioned by them are PAOK, Olympiacos an Dinamo Zagreb.

It seems it will still take a while until Benfica and Krovinovic choose his next situation, but he looks unlikely to continue playing for the Baggies this season.

Perhaps Nottingham Forest would be a good move for him to remain in a country which he’s already adapted to.