On Wednesday, we covered two stories about the future of the FC Porto striker Moussa Marega.

One, which wasn’t very convincing, came from A Bola, and said the player was leaving for West Ham United on a €40m deal.

The other one, from O Jogo, said the Dragons had a bid from England on the table, but it wasn’t guaranteed it came from the Hammers, despite being the most likely possibility.

Now we bring a few more stories from the Portuguese media this Thursday, and the claims continue to be quite different from each other. 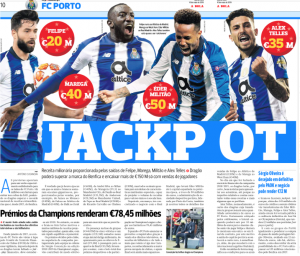 Let’s start with A Bola.

They report many sales Porto are doing this summer, and write that president Pinto da Costa has already ‘sorted all the details’ of Marega’s €40m transfer to West Ham.

Newspaper Record comes up with a similar story, despite not having a big conviction.

They say Marega is going to England, as his exit is ‘imminent’, and the destination

‘should’ be West Ham, with the transfer giving Porto an amount of €35m.

Marega who has 21 goals and 11 assists this season.