Home Europe From Portugal: Bruno Fernandes is ‘where he always wanted to be’ –...
SHARE

We’re a little worried about how badly the Portuguese press will take it when Bruno Fernandes has a bad match for Manchester United.

It’s going to happen sooner or later, and if it’s sooner and extends to more than one game then the player will likely feel the pressure of sections of the English media and his own club’s fan-base.

Right now, that isn’t the case, and Portuguese newspapers are publishing endless articles about Bruno’s good start to life at Old Trafford, and how supporters have already taken him to their hearts.

Tuesday sees the return of A Bola, who have a couple of articles on the good situation. The longest one, from Fernando Guerra, is gushing in praise of Bruno and that he’s managing to fulfil his dreams.

The journalist says that in Bruno’s fourth game for the club he ‘scored, assisted, watched, invented, and delighted the fans of his new club with whom he builds a relationship’.

Bruno’s ‘immense quality’ allowed him to open the doors to the ‘most fantastic league in the world’, in a country where football artistry is cherished and ‘where he’s always wanted to be’.

For some in Portugal it’s thought there’s often too much controversy around clubs there, and now the footballer doesn’t have to worry about that: ‘In England, each game is played with enthusiasm and pleasure, in a permanent test of the limits of emotions, because the common fan realises that a game is a game, that’s all. Moment of 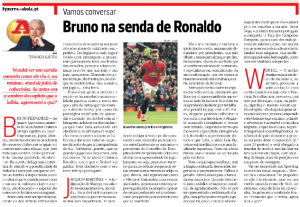 celebration, frustration, shock of feelings, but only a game and… a party.’

Guerra describes the player as a ‘genius’ and says ‘Bruno is on Ronaldo’s path’, adding ‘I believe that United will earn good money with their new Portuguese reinforcement’.

Should he mean when it comes to selling him, that’s certainly not something Manchester United or their supporters are even going to consider for the foreseeable future.