Carlos ‘Gullit’ Peña’s last game for Rangers was in October, and since then, he was nowhere to be seen in Glasgow, with Steven Gerrard not requiring the footballer to be part o his Ibrox set up.

There haven’t been many stories about him in the Mexican media either, but now he’s back and ready for a move away from the Scottish Premiership side, ready for a fresh start both personally and professionally.

The striker has been taking care of some personal problems, especially alcoholism. He’s talked about it during TV show ‘Futbol al Día’ this week, and the quotes are brought by newspaper Periódico AM Express.

“I am calm, I do not feel sad or scared (to talk about it), because I did have a problem with alcoholism…” Peña told Futbol al Día, revealing the name of the clinic where he’s been treating himself. “Then I got involved with Chavez, with Julio César Chávez, and truth is it went very well.

“I’m still in rehabilitation, I have a person who takes care of me, I’m still in talks and the truth is as it happened to me, it can happen to any family member, it’s not to say ‘Ah, I was an alcoholic’ and to be scared; that happens in daily life.” 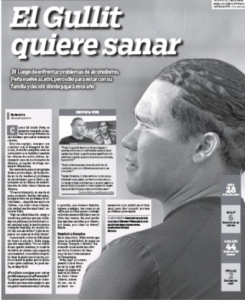 “The people that I really considered to be my friends and that were really very close and dear people, that were family, are still with me; the others I already knew that they were not going to be with me in the difficult moments and you must realise. In this environment there are many envies for money, for fame, for how you dress.”

Peña is still a Rangers player, and has a contract with the Scottish side running until 2020. However, it’s likely that he’ll be loaned out this month. The striker has claimed that he may move to ‘Poland, Turkey or Mexico’, and has been linked to a few clubs from his home country.