Earlier this month, we covered a report from Sport, who claimed that Barcelona are ‘best positioned’ to sign Frenkie de Jong, while there was also a mention about the interest from Tottenham Hotspur.

On September 9th, we relayed news from Spain that Ajax turned down the north London club’s €50m bid for the midfielder, which was €20m more than what Barcelona offered.

Mundo Deportivo now explains the situation in today’s edition, and the Catalan newspaper once again mentions the Dutch club knocking back two different bids after Marc Overmars revealed the La Liga winners “did not value” the 21-year-old enough.

Mauricio Pochettino has the services of Toby Alderweireld, Davinson Sánchez, Jan Vertonghen and Christian Eriksen, and all these players have the DNA of having move from Ajax to Spurs. That\s not quite how DNA works, but we can put that to one side.

Pochettino could add another impressive player to his squad and the transfer DNA is thought to be an advantage.

It’s also stated Tottenham and Ajax share a good relationship because of all this business, and this could help Spurs in their efforts to sign De Jong, when his employer decides to sanction his sale. 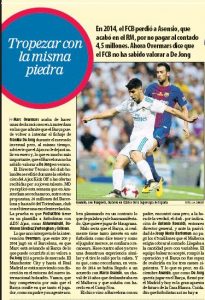 Mundo also suggests the English club will face competition from Barcelona, Manchester City and Real Madrid as the latter two are ‘moving with discretion’ in their approach for the Ajax player.