Just because the transfer window is closed, it doesn’t mean English newspapers on Sunday will stop claiming clubs are looking to buy players.

The Sunday Express stated Tottenham are keen on Frenkie De Jong at Ajax, and regardless of there being any actual information behind the story, it makes some degree of sense.

De Jong is a very talented young footballer and expected to go on to the highest heights of the game. He would just about be in reach financially (possibly somewhere over €40m), and Tottenham know how to deal with Ajax having done several deals in the past with the Dutch club.

The claims have inevitably made it all the way to Catalonia, and that’s because Barcelona have been keen on De Jong.

All summer there have been claims in the Spanish media about Barca’s interest in the young midfielder, and the story has been so big he’s been on several front pages. 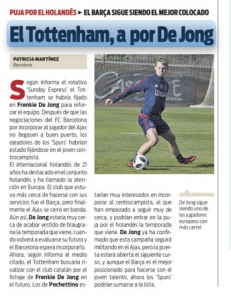 Catalan newspaper Sport have picked up the Tottenham claims and insist Barcelona are ‘best positioned’ to make the signing. They’d wanted to agree a deal this summer, but Ajax were set against it.

De Jong is thought to be keen on the idea of signing for Barcelona, which would prove a problem for any Tottenham interest.