Fulham star Ryan Sessegnon is becoming a serious target for Inter Milan this summer, according to reports from Italy.

Newspaper Tuttosport claims today that the player was watched by a club official this Tuesday, when playing for England’s U21 side against France.

The outlet claims that club director Piero Ausilio was the one who travelled to watch the 19-year-old, and that’s enough to make it clear the Nerazzurri are really interested.

Tuttosport writes that after relegation to the Championship, Sessegnon has ‘already made it clear’ he doesn’t want to extend his current contract with Fulham, which runs until 2020.

There’s been repeat links with several clubs, with Tottenham probably the one mentioned the most. Mauricio Pochettino’s side have been following the youngster for a while, and Spurs have previously failed to get a deal over the line.

However, it sounds like he hasn’t forgotten Tottenham’s efforts. 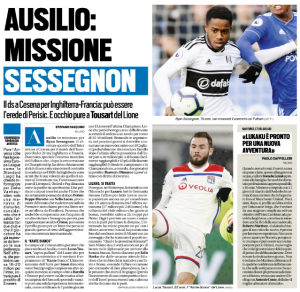 Inter Milan see Sessegnon as a replacement for Ivan Perisic, who should be leaving this summer. The English player would be alongside Frederico Chiesa as their top priorities for the position.

Tuttosport claims that if staying in the Premier League, Sessegnon’s wish would be to move to Tottenham Hotspur. But the interest from Liverpool, Manchester United and PSG shows how ‘open’ the race is, and that’s why Inter believe they have a chance.