Home Championship Player’s move to Leeds could be ‘matter of hours’ away, will be...
SHARE

Rafa Mujica’s contract at Barcelona expired on Sunday and he is available on a free transfer.

On July 1st, we relayed news from Spain that he will ‘defend the colours of Leeds United’ next season, but no additional information was provided.

In Tuesday’s edition of Catalan newspaper Sport, they look at those players who have already completed moves to other clubs after being released by the La Liga winners.

Within the report, they claim that the 20-year-old is the only player whose fate is still hasn’t been confirmed.

The Championship side once again get a mention as they claim ‘everything points to Leeds United’ for the forward.

Sport go on to explain it could be a ‘matter of hours’ before the Whites conclude Mujica’s signing on a free transfer. 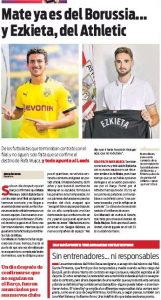 The report also makes it clear the player will not be part of Marcelo Bielsa’s first team squad at Elland Road and instead will represent the club’s U23 side… at first anyway.