Sold to Milan only to be bought back a year later, Leonardo Bonucci never quite had the same impact on his return.

The 32-year-old still remained an integral part of Max Allegri’s plans, making 41 appearances in all competitions, during which he scored three goals, but with the arrival of Matthijs de Ligt, someone will have to make way.

According to Corriere dello Sport, that man could be Bonucci, and Manchester City are back in town to try and sign him from Juventus.

If you’ve been an avid follower of the transfer window over the years, you’ll be aware this isn’t the first time Pep Guardiola has been after the veteran defender, with claims back in January 2018  (that followed a big saga in 2016) he could be saved from Milan by the Premier League champions.

That never happened, but the Italian newspaper firmly believe on Tuesday that Manchester City want him, and the return is ‘concrete and clamorous’. 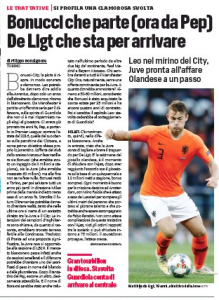 A ‘serious offensive’ has been launched from the Etihad to sign the Italy international, with ‘direct contact’ between Juventus and the Cityzens allegedly taking place recently.

The intentions of Pep Guardiola and co. are ‘clear’, and Juventus would not ‘oppose’ a sale if the right offer came along.

Real Madrid and Barcelona are also said to ‘value’ Bonucci, but it seems the price tag slapped on the defender’s back by the Italians could put a few off.

Corriere reckon a bid of ‘at least €50-60m’ would be needed seeing as he was bought back from Milan for €35m and has four years left on his deal.

That seems a bit much, if you ask us.