Mario Balotelli to Lazio is picking up pace, and Il Messaggero in Italy are all over it.

The Italian newspaper had a story in their paper on Thursday about Mino Raiola offering his client around as the striker looks to relaunch his career, and we’re now one step closer to getting a deal done.

There’s still some way to go, but Il Messaggero report the super agent is currently trying to negotiate a deal that would suit all parties, with Lazio only willing to pay a third of the player’s wages. 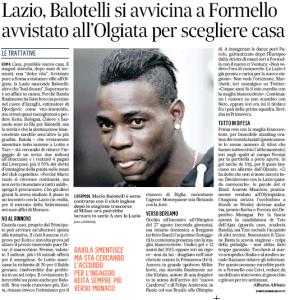 Currently on €6m/year at the Merseyside club, the Serie A side can only really afford to pay €2m of that, with Liverpool asked to pay for the remaining €4m.

Furthermore, Lazio want to receive 50% of the image rights from the player, looking to cash in on the marketing aspect of bringing such a big name to the club.

Add on top of that the fact the player has allegedly been spotted looking at houses around Rome’s city centre, and you have yourself a pretty interesting story.

Despite his faults, and he has a fair few, the player remains a talented footballer who has shown his ability to play at the highest level when encouraged in the right manner.

Lazio could do a lot worse than sign a striker who has proven himself in Italy before, and with a lot to prove after his failed return to the Premier League, they could be in for a treat.