If it’s true Chelsea have offered Andreas Christensen to Southampton as part of a deal for Virgil van Dijk, then perhaps they should have consulted with the player’s father, also his agent, first.

Christensen is coming to the end of a two year loan at Borussia Monchengladbach. It’s been very succesful for the Danish defender, and he’s established himself as one of the top Bundesliga defenders.

Gladbach naturally want to keep Christensen, but continually make public noises about having to give up, because Chelsea hold all the power and will be taking their player back.

From Southampton’s perspective getting Christensen and a big chunk of money could be a brilliant move, with the 21 year old having the potential to surpass 25 year old Van Dijk in the not too distant future.

Hearing the claims from England, Danish newspaper Ekstra Bladet contacted Sten Christensen, who told them: “Andreas will not be used in a barter and play for 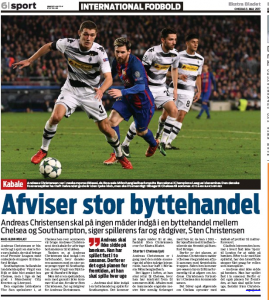 Southampton. There are no ways for this to happen.

“Andreas should not sit on the bench. He has played solidly for two seasons. Therefore, it is also planned for the future that he will play every week.”

Sten Christensen doesn’t sound too happy with the situation, Which, if the claims are true, is perfectly understandable.