Fotomac claim Jean Michael Seri’s future will depend on which league Fulham will be playing in next season.

The west London club loaned Seri to Galatasaray at the start of the season and the Ivorian midfielder has impressed with his performances, especially in the second half of the campaign so far.

According to Fotomac, Galatasaray would like to keep Seri at the club for another season, but this is likely to depend on Fulham’s promotion push to the Premier League.

Fulham are currently sitting in third place in the Championship, six points behind second-placed West Brom. The Turkish newspaper report that if they remain in the second tier then Gala will look to loan Seri once again. 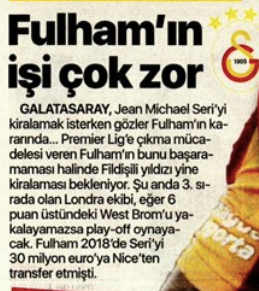 Seri joined Fulham from Nice for €30m but following Fulham’s relegation he moved to Galatasaray.

He’s made 29 appearances in all competitions for the Super Lig side, scoring one goal.

His contract at Craven Cottage will expire at the end of June 2022.