Home Premier League Chelsea Player will ‘do everything possible’ to secure transfer this summer, that’s to...
SHARE

Mateo Kovacic has no intention of returning to Real Madrid when his Chelsea loan ends this summer.

The Croatian midfielder forced his way out of the Spanish club last summer, feeling he wouldn’t be valued enough there.

With Zinedine Zidane now back in charge at the Bernabeu, Kovacic’s mind is even further made up. Despite Madrid being one of the biggest clubs on the planet… it’s not somewhere he wants to be.

A couple of week ago we covered claims from Marca that the footballer’s ‘priority’ is to sign for Chelsea beyond the end of the current campaign.

He’s found what he was looking for, at least to a certain extent, and is enjoying living in London. 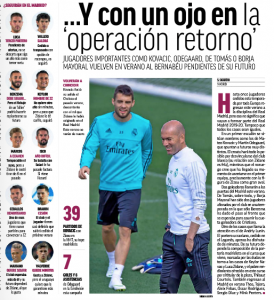 The big problem is Chelsea’s registration ban, which will make a summer move impossible, unless CAS either overturn the ban or allow the Blues to sign players whilst a full appeal is heard.

Tuesday’s edition of Marca makes it very clear that Kovacic has made his mind up and isn’t set to change it.

The 24 year old will ‘do everything possible’ to secure himself a Real Madrid exit, whether that’s to Chelsea or anywhere else.