Home Europe Player ‘wants to leave’ Everton in summer, joining another club is ‘one...
SHARE

On March 28th, we covered claims from Spain that Real Sociedad have made ‘first contact’ with Everton to sign Sandro Ramirez in the summer, either on another loan spell or permanent transfer.

Marco Silva allowed the forward to join the La Liga side on a temporary deal last summer and after having failed to score even a single goal, the 23-year-old admitted “I would be proud” to continue with La Real.

Real Sociedad manager Imanol Alguacil is an admirer of the Toffees player, despite the club’s board, fans and associated media not being sure why.

Gipuzkoa’s edition of Mundo Deportivo claims Sandro is enjoying life in San Sebastian and feels integrated in the dressing room, though he is yet to find the back of the net.

So far, there hasn’t been any contact between the Spanish club and the player’s representatives, but the situation could change as we head into the final weeks of this season. 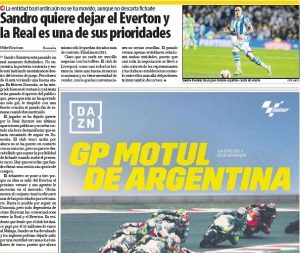 The attacker ‘wants to leave’ the Merseyside club in the summer and joining Sociedad is ‘one of the priorities’.

It depends on how conversations with Everton progress, and it’s stated a €6m fee would be sufficient for the English club to sanction the attacker’s sale, although yesterday the media closest to the Basque club suggested it would need to be a free move.