Marca continue their disagreement with others in the Spanish media regarding Arsenal’s intentions over Dani Ceballos.

On Thursday the Spanish newspaper said Arsenal would be willing to cancel the player’s loan from Real Madrid, allowing him to move elsewhere on a temporary deal.

However, AS, Super Deporte and others in Spain took the opposite stance, and explained it’s the Gunners not wanting to lose Ceballos, because they may need him as the season goes on, which could hold up a move.

Sticking to their guns in their Friday edition, Marca explain Euro 2020 is the specific reason the midfielder wants to ‘escape’ from London this month. He feels that if he returns to La Liga and gets minutes, with Valencia ready to provide them, that he’ll be chosen for Luis Enrique’s squad.

That’s what it largely boils down to. 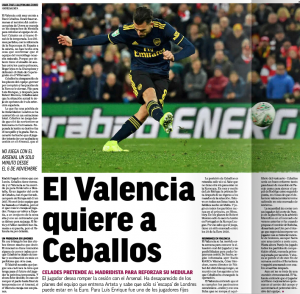 Marca explain Ceballos’ name has been discussed at Valencia ‘for weeks’.

Just like Super Deporte did on Thursday, Marca state there’s been a meeting in Valencia between the club and the Arsenal player’s agents.

This looks like it will all come down to how flexible Arsenal are willing to be.