Since the Portuguese press started reporting Sporting’s will to sign Andraz Sporar, they’ve been pretty confident about the Lions’ chances.

It was in a story from the Scottish media where it all started. A Slovan Bratislava director was talking about interest from Celtic, and ended up revealing efforts from the Lisbon side.

Now as the Portuguese press continues to report it, they claim the player himself would rather move to Sporting than Celtic.

It’s A Bola who reports it today. They say the Glasgow side haven’t made a bid for the player, but even if they did, he’s already told his representatives he prefers the Lisbon club. 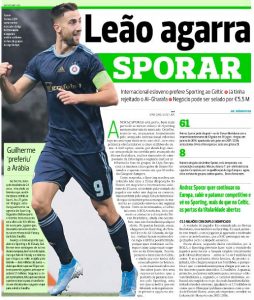 A Bola writes that Sporting have already made a first bid, of less than €5m, but that has already been rejected by Slovan Bratislava.

The Slovak club had been demanding something between €7m and €8m, but it’s claimed it’s more likely that a deal will end up being done for around €5.5m.

As far as A Bola have it, Celtic are out of this one.