Home Europe Striker rejected chance of signing for Newcastle, would rather stay where he...
SHARE

AS Roma are planning big changes in their squad for the January transfer window, and newspaper Tuttosport details a few of them.

One of the substitutions the Gialorossi want to make is in their attack, where they’d like to replace Nikola Kalinic with a new striker.

The Croatian international is said to be wanted by several clubs, including Newcastle United, but his wish isn’t to move this month.

Tuttosport says he’s rejected several offers. Besides the Magpies, Bordeaux and Verona have also reportedly tried to take him from the Serie A side. 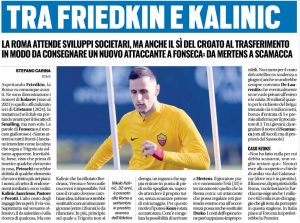 Tuttosport doesn’t consider it to be a final decision, since they say Kalinic could change his mind and allow Roma to continue with their plans.

The striker actually belongs to Atletico Madrid, and is having a season-long loan spell in Italy. So in case Newcastle engage in negotiations for him, they’d have to speak both to Roma and to the Spanish club.