Chelsea were keen on signing Jules Koundé last summer and made an offer to Sevilla towards the end of that window.

The Spanish club’s sporting director, Monchi, had confirmed receiving the Blues’ proposal for the defender. However, their offer didn’t end up convincing Julen Lopetegui’s side.

Koundé continued with the La Liga side and Chelsea are still said to be in the picture to sign the 23-year-old.

That’s according to Sport, who add the centre-back ‘does not want to continue’ and ‘asks Sevilla to open the door for him’ to change clubs in the upcoming window. He was keen on joining Thomas Tuchel’s side and the feeling remains.

The France international wants to avoid last summer’s disappointment, when the La Liga side didn’t allow him to join Chelsea, with whom he had already reached an agreement.

The player wants to ‘back his bags’ as soon as the summer window opens. At least, that is his wish, and he’s already informed the Spanish club about his desire to leave them.

Chelsea will almost certainly part ways with Antonio Rüdiger as Tuchel has already confirmed the German will leave the club as a free agent at the end of this season.

Once Rüdiger’s departure is confirmed, the west London club ‘will return to the fray for Koundé’, provided they are allowed to make new signings. As it stands, Chelsea cannot bring in new players following sanctions on Roman Abramovich. 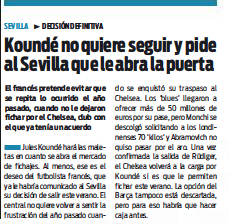 The Russian billionaire has announced he wants to sell the Premier League side.

The latter are in the process of finding a new owner. Once this is sorted out, they can make new signings and make an approach for Koundé.