Bought in a €19.6m deal from Greek side Olympiacos, he’s made only seven appearances for the Premier League club so far, and is still starting to get a taste of English football.

O Jogo mentioned that they interviewed him one year ago, and he was totally focused on Olympiacos. Now things have changed a lot for him.

“It’s true. At the time I didn’t know of any other club’s interest and the move to Wolverhampton happened in an unexpected way.’

On the January saga he was involved in, Podence said: “Coming to the Premier League made me a little anxious, but at the same time I felt very good at Olympiacos. I heard about Wolverhampton’s interest around the 5th of January, at the same time that they also told me about Sevilla, but I ended up moving to England only on the 29th or 30th”. 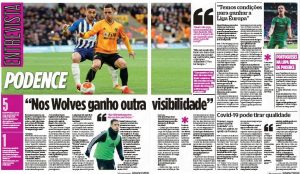 Before accepting the Wolves offer, Podence says there was a specific player he called: “I spoke to Rui Patrício, as we had already played together at Sporting, we are friends and he spoke to me very well about the club. It also made me come to England.”

The winger also claims that the number of Portuguese players has been helping him a lot with his adaptation to the club.

“This is almost like adapting to a Portuguese team and at Olympiacos it was the same. Basically, I never had any adaptation problems, because I never went to a team that didn’t have a Portuguese.”

Podence was also asked if Wolves can win the Europa League, and he claims to have no doubt about it: “Of course we can. Wolverhampton are a club with some history and I have won titles in all the clubs I’ve been, including Moreirense with the League Cup. At Wolves we are fighting for fifth, sixth place, but nobody tells me that next season we cannot fight for second and for the access to the Champions League or for the title in the Europa League this season.”