Home Europe Player says he decided on Everton exit ‘half a year ago’ –...
SHARE

We’re often more than willing to take what a player says at face value, report on it and move on happy that he’s telling the truth.

Sometimes, though, we have to call a player out, point the finger and tell them they’re talking nonsense. And that leads us to Kevin Mirallas.

The Belgian forward completed a return to Belgium yesterday, securing a move to Antwerp from Everton, who were more than keen to get him off the wage bill this summer.

Mirallas is pretty enthused about the return home, sitting down to an interview with Het Laatste Nieuws and revealing he decided to try and secure a return to Belgium long before this summer.

“Half a year ago, I decided to return to Belgium for family reasons. Antwerp pushed through the hardest,” he told the newspaper.

“In March and April, I was once together with my wife, my children and my manager. The conclusion was that after sixteen years, it was time to move closer to home.

“My family had seen it a bit abroad. Moreover, one day, I wanted to play in the Belgian first class.

“As a little boy, that is what you initially dream of. On the emotional level, it does something to me.

“Of all the Belgian clubs, Antwerp pushed the hardest. All parties involved have made an effort. I am glad it worked.”

That’s very nice, except not entirely true. Mirallas spent last season away from Everton on loan with Fiorentin 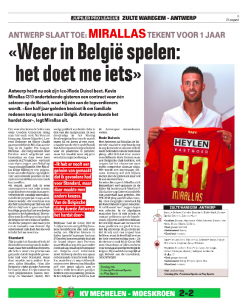 a, managing two goals and three assists in 30 appearances for the club.

Throughout his time in Italy, it was reported he was very, very keen on staying with La Viola for as long as possible.

He openly admitted it, telling Tuttosport ‘I hope my future will be with Fiorentina. I feel good here, and I would like to stay’, among other things.

Now that was only in March when this conversation about returning to Belgium was supposed to have happened as well.

So unless Mirallas had one conversation, then suddenly spoke to his family and decided to do the complete opposite, we think he’s telling porkies on this occasion.