Wednesday’s edition of AS has a story about Jan Oblak citing Slovenian sports daily Ekipa as the source and they look at the goalkeeper’s situation at Atletico Madrid.

Paris Saint-Germain and Liverpool interest in him was in a ‘strong way’ in the summer, for the player who has a contract with the Spanish capital club until 2021 and has a release clause of €100m.

The Reds added Alisson Becker to the squad in July as he arrived at Anfield from AS Roma, but prior to his arrival at the Merseyside club, the Europa League winner’s custodian was a target for Jurgen Klopp’s side.

It’s claimed the Premier League side made an ‘important offer’ for the 25-year-old, but he turned down the approach from Liverpool as he is expected to join the Paris-based club after the end of the season.

Ekipa via AS’ report a ‘source’ close to the player explained that the keeper rejected Liverpool, while PSG cited FFP restrictions for not signing him before the start of this campaign.

Diego Simeone’s side are yet to hand Oblak a new deal so far and their decision to prioritise renewals for other players has upset him and therefore it’s claimed he has no plans to renew his current deal with Atletico. 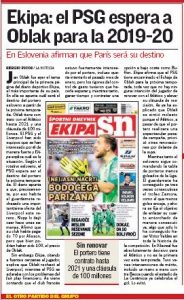 Based on the current situation, Liverpool are unlikely to be disappointed on failing to land Oblak because Alisson has been in fine form for them, conceding only three goals in nine league matches.