Over the weekend, Porto attacker Vincent Aboubakar spoke to the Turkish press and confirmed his wish to join Swansea City, probably in a desperate move to get a Premier League transfer.

His quotes about Swansea had a quick impact in the Portuguese press, as all the papers were excited to see what the outcome of this story would be.

Aboubakar wasn’t happy with Porto’s board, and as he’s returning from a season long loan at Benfica, the local media had a close eye on the player on his first day back at the Portuguese club. 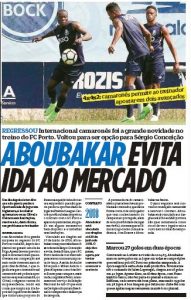 But it was a surprise for newspaper O Jogo to see Aboubakar presenting himself normally on Monday morning. In today’s paper edition, the outlet claim he’s now ‘avoiding going to the market’ and should be an option for manager Sergio Conceição this season.

The Swansea City transfer trail, having been so hot a couple of days ago, has now been bathed in ice water.

Later ton Monday, Aboubakar spoke to local journalists and confirmed he will not force a move out of the club.

“The most important thing is the team, the collective. We are going to try to win titles for everyone to be happy at the end of the season.”

The transfer market is always hard to predict. But although Aboubakar’s departure from Porto seemed certain in the past few days, we now can see things have changed, and taking him from the club may well be harder than thought.

That said, there’s every possibility Aboubakar could change his mind over the next 24 hours and be keen on a Swansea City transfer once again.