Home Premier League Chelsea Chelsea could be provided with opportunity, at €40m or under, to send...
SHARE

It was only a matter of time really, but with all their new money, and Manchester United pipping Chelsea to Romelu Lukaku, Nemanja Matic is being linked with a move to Inter Milan.

One of the main targets for Juventus last summer, the Serbian midfielder enjoyed a strong Premier League winning season under Antonio Conte in 2016/17, but with the potential arrival of Tiémoué Bakayoko from Monaco, an exit this time around seemed likelier than ever.

José Mourinho was the favourite to be reunited with his former player, yet the relationship between the Blues and the Red Devils probably isn’t the best right now, leaving Matic up for grabs for anyone interested.

Corriere dello Sport on Tuesday explain that at €40m, a deal between Inter and Chelsea ‘isn’t impossible’, and there’s a feeling that price could go down if they wait a bit longer before making a move.

Matic’s reliability is what makes him attractive to Lucian Spalletti and co., and the fact his price could go down makes him a slightly more attainable target than Steven N’Zonzi, for whom Sevilla refuse to accept less 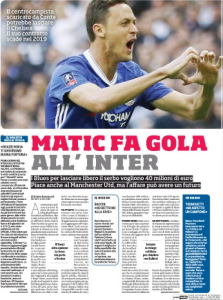 than his €40m release clause.

It’s early days, and the Serbia international is the new kid on the block for the Serie A side, but there could be something in this if Manchester United do start seriously looking elsewhere.

With talk now of Mourinho turning his attention to Eric Dier, and vague rumours of renewed interest in Tiémoué Bakayoko, that day could come sooner rather than later.

Agent reckons Tottenham will sort defence ‘for next 10 years’ with...