They said the Baggies want the player on a season-long deal, paying €300k to have the player for a year, with another €300k to be spent in case he isn’t used enough.

That proposal was said not to be very good, with Sporting demanding €1m to loan Pereira out, plus wanting to include a buying option of €8m in the deal.

Now Record are back with the story today, but this time, sounding a lot more positive about the possibility of a move.

They say Pereira wants to fight for his place at Sporting, but in case he has to leave, West Brom are seen as a ‘viable’ option. 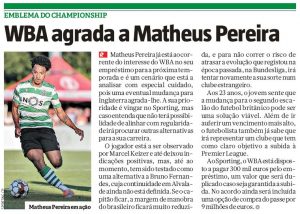 Besides getting a pay raise to make the move, the fact that the Baggies have the promotion to the Premier League as a goal has also helped to convince him.

Just like yesterday, Record once again claims that Pereira’s move has a lot to do with Bruno Fernandes. He’s his substitute, so in case the captain moves to the Premier League, Sporting will work harder to keep the Brazilian in the squad.

Regarding the negotiations, all Record says now is that West Brom want to pay €300k for the loan and ‘the deal would have’ a €8m buying option.

To us, that sounds like the clubs found a common ground regarding the fee, even if the report doesn’t make it very clear.