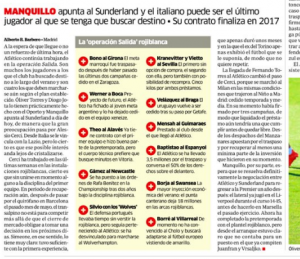 Former Liverpool defender Javier Manquillo has been strongly linked with a move to Sunderland and Watford.

According to Marca on Tuesday, Manquillo is hoping Sunderland and Atletico Madrid can wrap up the transfer negotiations soon so that he can return to the Premier League.

Marca don’t mention Watford, which would lean things more in the favour of Sunderland.

The Spanish newspaper also haven’t mentioned if the deal is temporary or permanent, but Mundo Deportivo earlier claimed Atletico Madrid want to sell him permanently this time.

The Atletico Madrid right back spent the 2014/15 season at Liverpool before the Merseyside club decided not to make his move permanent and sent him back.

The Spaniard was again sent on loan last season to Marseille, and it now appears he is set to return to the Premier League.

The 22-year-old has another couple of years left on his contract at Atletico Madrid, and it’d be interesting to see if they send him out on loan again or offload him permanently.