Home Europe Player ‘has proposals’ from Manchester United – Has been ‘tempted’ over move...
SHARE

Two days ago, Mundo Deportivo reported Manchester United are ‘moving the most’ for Ousmane Dembélé and have initiated contact with the Barcelona player’s entourage.

The winger’s contract at the Camp Nou lasts until 2022 and a few months ago, his idea was to not renew.

Barca also showed no willingness to tie the 23-year-old down to a new deal. However, things have changed and the La Liga side’s new board now want to offer him an extension.

Wednesday’s edition of Mundo Deportivo explains the France international is ‘living his best moment’ at the club, since joining them from Borussia Dortmund in 2017.

His performances have attracted attention from the Red Devils and Juventus and the report adds he has ‘proposals from Juve and United’. Ole Gunnar Solskjaer’s side even ‘tempted’ the World Cup winner to join them on loan in the last summer window.

Despite the proposals from Manchester United and the Turin club, the wideman will wait for an offer from Barca because his priority is to continue with his current employer.

Dembélé is not only having a good time on the pitch, but he also has the backing of Joan Laporta. The club’s new president has made the player’s contract extension one of his priorities.

Laporta, however, is aware money will be the main factor when it comes to convincing the attacker. Barca’s finances are impacted by the pandemic and therefore, they will be forced to make a renewal proposal with a ‘significantly lower’ salary than he’s currently earning.

Dembélé’s immediate focus is on helping the Spanish giants win two trophies in the next two months and once the season is over, he and his agent will know they will more or less be in a better position to negotiate.

In the event the Frenchman decides against signing an extension, Barcelona will make 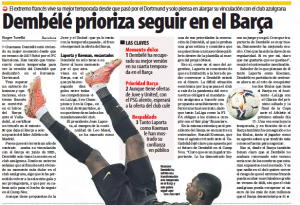 him available in the next market.

Manchester United are in the mix for his signing, should that be the case.

More clarity on this case can be expected in the coming weeks.