The Catalan press are grasping at straws. Neymar’s potential Barcelona exit is such a mess that it’s hard to place any kind of positive spin on the situation.

Even if Neymar stays at Barcelona beyond the end of the current transfer window, the process will leave long lasting damage, and relationships which were actually fractured will have cracked some more.

Yet, despite all of this, Barcelona’s transfer guru Robert Fernandez continues to strut around with his almost trademark smugness, and that gives some confidence to the Catalan press. If Robert can continue with the strutting, then surely everything is in hand?

That confidence leads to a brashness in transfer rumours, and chief of them all right now is Phillipe Coutinho. Monday’s edition of Mundo Deportivo explains Liverpool are holding firm in negotiations ‘for the time being’, but there’s hope that will change. 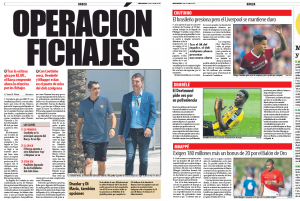 An initial offer of €70m plus €10m was turned down, but Barcelona believe they can talk Liverpool down on what is presented as a €100m asking price. Perhaps that’s why Robert always looks so pleased with himself, because he lives in an alternate reality.

The idea of Liverpool coming down from €100m is hard to believe, given that it’s also hard to believe they’d accept the full €100m in the current market.

Nevertheless, Barcelona are preparing a new offer, after Coutinho gave them the ‘OK’.