Jordy Clasie’s situation is a bit of a mess.

Had he really impressed at Feyenoord this season, the plan would have been for the Dutch club to make a big financial effort, and for Southampton to lower their demands, and a permanent transfer be arranged.

But he hasn’t and there’s a good chance that even if he was a permanent Feyenoord player now his future wouldn’t be secure, with Jaap Stam arriving as manager and youngsters coming through.

He managed to make things worse at the weekend. When manager Giovanni van Bronckhorst brought him off against Heracles at the weekend, Clasie had a temper tantrum.

He wouldn’t shake his manager’s hand, and then threw his kit around the bench.

The Southampton owned player later apologised, but it didn’t fully save him. De Telegraaf say he’s been fined and pulled into a meeting to have a ‘solid conversation’ about what happened. 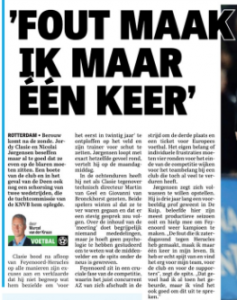 This doesn’t sound great for his chances of staying at the Dutch club, and that’s where Clasie wants to be.

A poor loan at Club Brugge and this season at Feyenoord aren’t going to inspire anyone to pay a reasonable fee.

So Southampton will either have to dangle a bargain price in front of the Rotterdam club and others, with Clasie taking a big pay-cut, or see if the midfielder can be of any use in the final year of his contract.