When Moussa Sissoko arrived at Tottenham Hotspur for €35m he thought the transfer fee would afford him a ‘certain status’ at the club, explain French newspaper L’Equipe.

That kind of attitude seems to have been what Mauricio Pochettino has referenced in public, demanding more from Sissoko and adding that extra pressure. Managers don’t often come out and be so open about their disappointment with a big signing, which would suggest Pochettino had good reason to do so.

Sissoko is said to have told those close to him: “It’s part of a career. I’ll finish the season and we’ll see later.”

Talks are planned in the next couple of weeks on the midfielder’s future and whilst an exit looks very possible, Spurs will likely lose a big chunk of money, with his value now estimated at €20m. 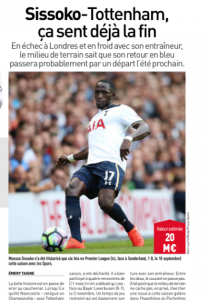 Another problem for Tottenham is finding a club to buy Sissoko which pleases them financially and is also acceptable to the Frenchman. Still with much career left ahead of him at 27 years of age, this isn’t a player who can be pushed towards China, he wants to get back in the France squad ahead of next year’s World Cup.

Perhaps Tottenham can look at their recent transfer relations with Marseille, and try to build a deal there. The French club will likely add in midfield during the summer, and having another France international on their books could be tempting.