Home Europe Player ‘doesn’t rule out’ signing for Tottenham in what would be game-changer...
SHARE

It’s that time of year again. Over half of the season has gone, it’s the business end of the campaign, and Gareth Bale is underwhelming at Real Madrid.

This season it was expected, or rather hoped, that Bale would step up in the absence of Cristiano Ronaldo and take on the role of Real Madrid’s undisputed leader, the player who could drag them them to repeated glories.

However, Marca point out he’s been overshadowed by Karim Benzema and Brazilian youngster Vinicius.

This means, according to the Spanish newspaper, that a sale is once again being considered to finance incomings at the Bernabeu. Once again the hope is that an English club will throw big piles of money at Madrid for the Welshman.

Tottenham are of course mentioned, and it’s claimed the player ‘doesn’t rule out’ a return to Spurs. It would be a game-changer for Mauricio Pochettino, in terms of the finances needed to secure the signing and the wages Tottenham would need to pay. 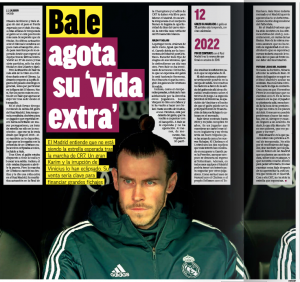 Marca say Real Madrid could use Bale to get Christian Eriksen from Tottenham, with the same suggested about Eden Hazard and Chelsea.

Eriksen has just turned 27 years of age, whilst Bale will reach the big three zero in the summer.