Harry Kane is ‘committed’ to leaving Tottenham Hotspur this summer as Manchester City eye him up as a replacement for Sergio Aguero.

That’s according to Sport, who cover the striker’s desire as part of a piece on Aguero’s potential move to Barcelona.

The Argentine striker has been heavily linked with a move to the Nou Camp over the last week, with his contract expiring in the summer and it looking likely he will leave Manchester City.

Should he depart then, City will need to find a replacement, and a list of potential targets has been mentioned over the last few weeks.

Tottenham striker Harry Kane is believed to be on that list alongside the likes of Romelu Lukaku and Erling Haaland. 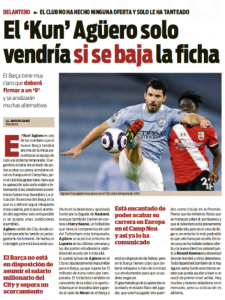 Kane has always been viewed as the hardest of any elite-level striker to get given his relationship with Tottenham and the fact they would demand a huge fee for their star man.

However, Sport say he is now ‘committed to leaving’ Tottenham this season, which would be a major boost to Manchester City’s hopes of getting him.

The newspaper states that City are actually set to ‘bet heavily’ on Haaland arriving from Borussia Dortmund, but they are ‘also looking’ at Kane as well.

There’s no mention of whether Spurs will grant him his wish, although we all know they will oppose it with everything they’ve got, but this is certainly one to keep an eye on as we get ever closer to the summer transfer window.