Barcelona manager Ronald Koeman would prefer to sign Memphis Depay instead of Manchester City’s Sergio Aguero this summer but could be overruled by the new board at the club.

That’s according to Sport, who say the Dutchman has made it ‘clear’ he would prefer to sign his compatriot if given the choice.

Barcelona are on the hunt for a new striker this summer, having struggled in that area this season, but given the financial situation at the club, have been forced to look at low-cost options.

Aguero and Depay both represent that, with the pair set to leave Manchester City and Lyon respectively as their contracts are coming to an end.

Both players have been linked with a move to the Nou Camp, with Depay actually reaching an agreement with the club last year and Aguero emerging as a surprise option over the last week or so.

Sport now look at that situation and say Koeman would prefer Depay because he believes that he can be ‘much more beneficial to the team’.

It’s explained that while Aguero would be ‘more exciting’ for Barcelona and their fans, Koeman is clear what he needs and is only looking at it from a sporting angle.

In this regard, Depay is the winner, having managed 13 goals so far and enjoyed a ‘great season’ compared to Aguero, who has been out injured or sat on the bench for much of the campaign. 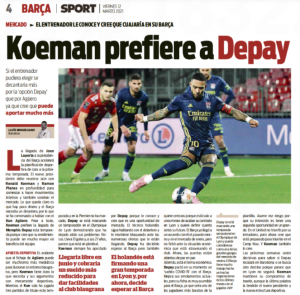 Koeman is also convinced about Depay having worked with him when in charge of the Netherlands, and he believes he is a ‘market opportunity’ for the club.

Indeed, he has maintained a constant dialogue with the striker in an effort to keep him on side and away from joining another club, a strategy that has worked as Depay has elected to wait for Barcelona to make their move.

The option of Aguero remains, though, and the next few weeks will be ‘decisive’ in the club deciding who they go for, with new president Joan Laporta and his new sporting structure having the final say.