There’s some disagreement in Portugal today over Bruno Fernandes, which isn’t a rare occurrence.

A Bola have a big splash explaining Manchester United are willing to pay €70m plus a further €10m in bonuses, whereas Tottenham want him for €68m.

Sporting obviously prefer the higher figure, and it was stated the player’s agent Miguel Pinho has been travelling between Portugal and England to try and build a deal with one of them.

Record have it differently.

They claim talks have ‘intensified’ in recent hours with Tottenham, and the player is now ‘very close’ to signing for the London club.

Record say Pinho arrived in the English capital on Thursday and spoke to Spurs, hearing from them what he expected to… that they’re ready to meet Sporting’s demand of €70m+. 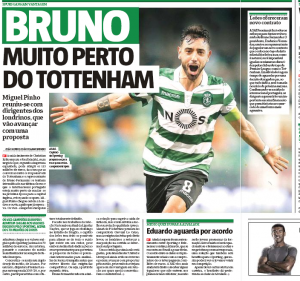 The whole slant is that Tottenham are making this move because Christian Eriksen is close to signing for Real Madrid, so if that isn’t true then perhaps this isn’t either.

It’s stated the Danish international’s move is ‘imminent’, which certainly isn’t something reflected by the Spanish media or in Denmark.

Despite stating Bruno is ‘very close’ to the transfer, Record say ‘the race isn’t won yet’ because Manchester United and Liverpool remain keen. However, those clubs are ‘at a disadvantage compared to Spurs, who have already materialised their interest.’