So here we go again. Round two for Manchester United’s attempt to sign Umaro Embalo from Benfica.

It’s with quite a surprise that we’ve read the player is ‘close’ to joining the Red Devils today, according to a report from Portuguese newspaper Correio da Manhã.

The story claims talks between the clubs ‘intensified’ during the past few days and there’s a €20m agreement which is ‘practically closed’.

This would be the minimum price that Benfica will sell the 16-year-old for. Manchester United have only raised their bid because they truly believe in his potential, and want to avoid competition from several other sides who are said to be interested. 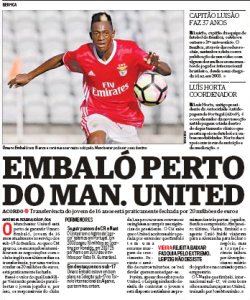 In case you can’t recall, the teenager was heavily linked to Manchester United in November, when newspaper Record claimed the deal was done.

That story soon disappeared, especially when RB Leipzig started talks for him.

The German side were said to be close to signing Embalo for this same amount, as the player even travelled to Germany, but some details couldn’t be agreed with his agent. Some papers claimed it was the commission, but representative Catio Baldé denied that, and left the door open for the summer transfer market.

At that time, it sounded like Manchester United would never pay such amount for a 16-year-old, but maybe after seeing that the competition was real, the club changed their mind.

Let’s just not jump the gun this time and wait for other sources to confirm it. For now, only Correio da Manhã has such info.