Benfica youngster Umaro Embalo is leaving the club to sign for Manchester United, according to claims from Portugal today.

Portuguese newspaper Record claims that the clubs have already reached a deal and the 16-year-old is ready to join José Mourinho’s side.

They don’t seem to know much Manchester United are set to pay for the youngster, although it’s certain he will be going to the club’s academy first.

Umaro is known for being a big fan of Di Maria, and the outlet mentions that he’s even nicknamed this at the Lisbon club. 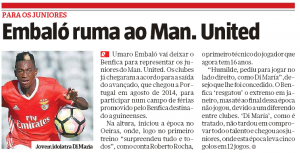 He’s been playing the UEFA Youth League for Benfica, where he has one goal and one assist in three appearances so far. In the two games against Manchester United, he had 26 minutes in one and wasn’t brought on in the other one. It’s worth recalling that this is an U19 tournament, so he’s really playing with the big guys there.

When the Red Devils had been linked to the youngster this year, Real Madrid and Liverpool were said to be in the race, but it seems that José Mourinho’s constant work in Portugal put Manchester United in the lead.