Bruno Fernandes to Manchester United appears to have gone pretty quiet over the past week.

There’s still been claims coming from both the Portuguese and English media, but nothing feels like it’s actually happening.

Sure, his agent Miguel Pinho is reportedly flying between the two countries almost non-stop, but he has an office in London and would likely be making several trips regarding other things anyway.

It’s Correio da Manha who are trying their best to keep things moving along, and on Sunday they say they’ve been informed Bruno is currently ‘calm’ and believes that a transfer will happen.

He’s returned to training with Sporting yet it’s not such a bad situation, given how highly thought of he is at the club. There’s certainly been no bridges burned and he’s behaving impeccably.

Pinho, meanwhile, is working hard trying to turn the idea of offers into something concrete. Manchester United, along with Tottenham, are ‘formulating a proposal’.

Spurs interest is reportedly reliant on Christian Eriksen going and there doesn’t seem to be anything happening in that regard. 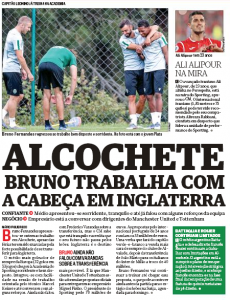 There’s been a lack of an official proposal for a while and part of the reason for that could be the €35m clause in Bruno’s contract. If a club offer more than that and it’s rejected then Sporting have to pay the player €5m, presumably only if he doesn’t then move in the same window.

Therefore, if any club has a real interest in signing the midfielder they’re probably best agreeing on a fee before going hostile and slapping in an official offer. That could be why Pinho is piling up the air miles.