On Saturday, Gazzetta dello Sport had a big splash on the striker’s proposed move to Inter Milan, but despite the size of the story there wasn’t really anything in it.

On Sunday, the article is smaller but the claims more significant.

Inter still want Lukaku, a lot, and it’s no secret the Belgian international quite fancies the move too. It’s stated Manchester United are asking for £75m, whereas the Italian club value the player at €60m.

There’s been attempts to use their own players as part of a deal, however, it’s once again stated that those in charge at Old Trafford have turned down Ivan Perisic and Mauro Icardi. 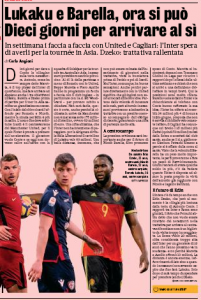 To push things along, Inter plan a ‘face-to-face’ meeting with Ed Woodward and others dealing with transfers at the Premier League club. That Manchester United have been happy to talk has given Inter some confidence that both sides want to reach a deal.

A direct meeting would be with the aim of finding an agreement ‘immediately’.

Talk of a loan with a redemption clause is covered again, and it’s explained there would have to be a big figure attached to this to make it worth it for United.