‘The Spaniards are annoyed’ report CalcioNapoli24 on Thursday afternoon, referring to Villarreal and how they’re getting more than a little irritated over Pablo Fornals rumours.

Claims have been building in the Italian media, mainly around Napoli interest.

Rumours of an impending offer have been met with bemusement at Villarreal, where the stance is clear: Pay his €33m clause or there’s no move.

Napoli hope for less, and CalcioNapoli24 implies the Spanish club wants them to put up or shut up.

English sides are being linked too, and whilst Manchester City is likely too lofty for Fornals right now, and Fulham too far the other way, Arsenal and West Ham may be more realistic. 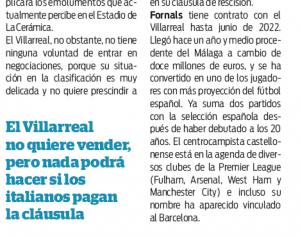 Thursday’s edition of Sport says the midfielder is on the agenda of both. Of course, the Gunners can’t spend €30m on a January signing, so Arsenal interest would have to be for the summer.

As for West Ham, they’re mainly being linked to strikers in the €40m range right now.