Mathieu Debuchy remains an Arsenal player and with all the European windows now shut, that’s likely how he’ll remain until at least the January transfer window.

Yet again the defender had a frustrating summer with transfers, but this time Arsenal seemed ready to help rather than hinder the fullback’s exit.

During the summer, the French media reported Debuchy had been on the verge of joining Nice. In some quarters it was suggested the deal was pretty much done, and the Frenchman’s Arsenal exit finally close.

Then, it all seemed to collapse, with various reasons suggested, none of which particularly flattering for Debuchy himself. Health, money, better options, any negative that could be thrown was, but it should have probably been avoided.

If Nice weren’t interested enough they shouldn’t have put the Arsenal man through a medical, and the same goes for his wages.

Debuchy has now confirmed the situation to L’Equipe and seems to want to get his story out there so it’s Nice’s management that looks bad.

“I had met Julien Fournier, the general manager of the club, in June in Monaco. We talked about everything, Nice and myself, to find out where I was. Then he asked me to meet the coach, which I agreed, necessarily. I even accepted to do physical tests, they were positive but afterwards, I did’t have any news.” 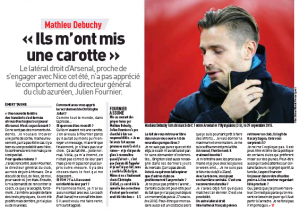 L’Equipe then asked how Debuchy found out Nice had signed Christophe Jallet instead: “Like everyone else, in the press…”

Asked how he reacted, the Arsenal defender said: “He (Fournier) could at least have sent me a message, warning me that in the end, I wasn’t their choice. It would have been… just normal. That’s it, it irritated me, it was not correct on their part but it didn’t surprise me too much. There are things in football that go beyond me.”

If Debuchy’s version of the story is correct, he’s certainly got a point, and settling that publicly may make him feel better about the situation.