Manchester City have not yet made an offer for Rafael Leao, report Record, but it feels like it’s half expected.

In a big story on the 18 year old for their Friday edition, it’s claimed Sporting don’t really want the youngster to leave before he has the chance to impress for the first team, make an impact, and obviously send his value through the roof.

That isn’t stopping interest, and Record present Manchester City are the keenest club. It’s explained Rafael Leao has been watched on several occasions this season by scouts from the club, and he’s certainly made an impact. 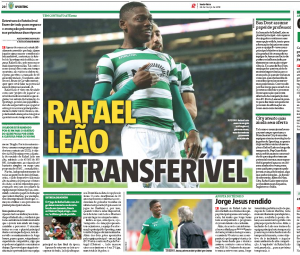 From what he’s learned, Pep Guardiola is said to be ‘perfectly convinced’ the young forward has ‘enormous potential’.

But so far Manchester City haven’t ‘advanced any proposal’ and until that happens there’s nothing for Sporting to really resist.

Record claims there’s also interest from other English clubs, as well as sides in Spain and Italy.