Giannelli Imbula has once again turned down the chance to represent the Congo national side. The Stoke City owned player isn’t having the best of loan seasons at Toulouse with now countless French articles explaining what a flop he’s been.

One may have thought an international call-up would be a chance for a break from normal club life, but Imbula isn’t up for it.

Imbula has represented France at youth level and also qualifies for the Belgium national team having been born there, but he’s a long way from representing either of those countries at the moment.

Failing to impress enough at Stoke, his Toulouse spell hasn’t yet shown enough to change the perception that Imbula is a talent unfulfilled. 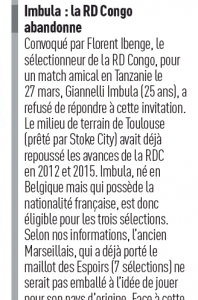 Congo football association president Constant Omari is quoted by French newspaper L’Equipe as saying: “He does not want to come, we will not force him. I’m not here to chase after him. This is not the first time he refuses, I take note: we come to the selection if we are motivated. Giannelli Imbula hopes maybe to be called by Didier Deschamps, it’s his right. Me, I give up.”

With very little chance of hearing from Deschamps soon, Imbula must have hope that at 25 years of age he can turn things round and make a France dream not seem so ambitious, and please Stoke City in the process.

Arsenal have ‘requested information’ about Serie A playmaker – Player seems...