Home Europe ‘Paratici is his number one fan’ – Tottenham to go for player...
SHARE

Over the past couple of months, the idea that Dejan Kulusevski could leave Juventus in the foreseeable future has started to grow.

The forward has struggled under Max Allegri this season, playing here and there but not getting the continuity he needs to develop, which has led to Tottenham reportedly being interested.

That all stems from Fabio Paratici, who was the one behind signing him for Juventus in the first place, and Corriere Torino push that some more on Friday.

They state that Juventus has been chosen as a ‘big expendable’ in the upcoming transfer market in case the ‘right offer’ comes along. 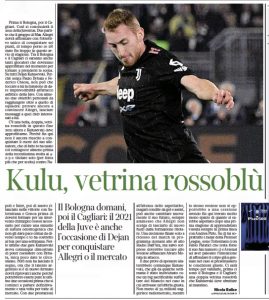 That would be ‘no less than €35m’, and the player ‘wouldn’t be opposed’ to a move to find ‘more space’ elsewhere.

The Premier League seems to be his next destination, where Tottenham and Arsenal ‘have indicated their intention to sink the blow in January in case the right conditions arise’.

Not only that, but it’s made clear that ‘Paratici is his number one fan’, suggesting a reunion would be ideal for the Italian transfer chief.