When Wolverhampton Wanderers signed Vitinha on a loan deal from Porto in the summer of 2020, the Portuguese media had been very confident that he’d stay at the Molineux.

Even though Wolves had a €20m buying option for the player and reports insisting it would be triggered at some stage following his 22 appearances for the Premier League side, the player ended up returning to his home country.

Now it turns out that Vitinha is doing great at Porto this season, not only improving his skills, but his effort and physique as well. That’s why newspaper Record today features a story saying he’s now the ‘owner of the game’ and has entered a ‘new dimension’.

The outlet quotes Dragons’ manager Sérgio Conceição, who in a press conference this week, said: “Vitinha did almost 13kms vs Braga There’s a huge difference since he came back from Wolverhampton”. 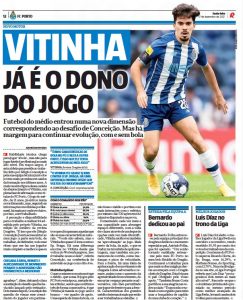 Wolves have scouted a few Porto matches in the past few weeks, with local outlets pointing out they had the chance to see Vitinha again, and are certainly aware of his improvements in the past few months.

The 20-year-old managed to become a regular starter with the Dragons, and it would be no surprise to see him being linked to another big move soon, perhaps even to the Premier League.