One of the key figures at Elland Road these days, Pablo Hernández may not have played every single game for Leeds United in their Championship title winning campaign, but when he did, the impact was significant.

Scoring nine goals and picking up another nine assists in 35 league appearances, the 35-year-old was a trusted outlet for Marcelo Bielsa, who will be hoping the veteran can replicate his form in the Premier League.

First arriving in the UK in 2012 when he swapped Valencia for Swansea, Hernández hasn’t been forgotten in his home country, as Cadena COPE reached out to talk to him about two things: the transfer of Ferran Torres to Manchester City and, of course, Leeds’ promotion back to the Premier League.

On the latter, he said, relayed by SuperDeporte: “They deserved it, after 16 years, for everything they represent. We’ve filled the stadium in every game in the Championship and away games have seen 7000-8000 of our fans in the stands. When I arrived, they told me Leeds was a ‘sleeping giant’, and it’s true.

“I’ve been able to see what it means in England and abroad. We went to Australia in preseason and the fanbase that crawled out was unimaginable. It’s great to be able to live all of this”. 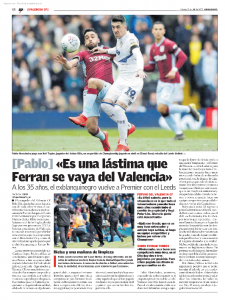 While the players have a lot to do with it, a lot of credit will be given to Marcelo Bielsa, who managed to turn a mid-table dweller into a title winning team in just two seasons.

For Hernández, who has played under numerous managers across the years, it was something he thoroughly enjoyed.

He explained: “It was a positive experience to be able to work alongside a manager like Bielsa. He knew how to get the best out of me, and the numbers show it. I had the best seasons of my career at the age of 34 and 35”.