Home Europe From Spain: Suggestion Guardiola could be edging towards Man City exit, and...
SHARE

Manchester City’s Eric García is a ‘priority’ target for Barcelona this summer.

This has been reported by both Mundo Deportivo and Sport on Friday.

The centre-back has a year left on his contract at the Etihad.

Mundo state: ‘The temptation that comes with a Barça proposal is very great, among other things, because it represents going back to his origin and closing a circle.’

They further add García could return to his former club, knowing the technical leaders ‘think of him as the best solution’ to be Gerard Piqué’s successor.

Sport, on the other hand, state City are ‘pushing hard’ to renew his contract. However, the player wants to return to Barca, and has already given his approval to re-join his old club.

Therefore, Guardiola’s side will have to find an agreement for a sale, because of García’s determination to become the first team player at Barcelona.

Another report from Mundo Deportivo gives a different slant on the whole situation.

The Citizens want to renew the 19-year-old’s contract. The teenager is evaluating the pros and cons of the proposal received from the English club, and also from Barca.

Before committing his future to City, one of the aspects to take into account is Pep Guardiola’s future.

The manager’s contract expires in 2021, and García wants to know his compatriot’s plans before committing future to his current employer. It would make less sense for him to sign a contract at City, and a year later, Guardiola decides to leave the club.

The former Bayern Munich boss has been in England four years and Mundo suggest Guardiola may not continue at City beyond his current deal.

According to Catalan newspaper, the manager’s path ‘invites us to think’ that he’ll be on his way soon. 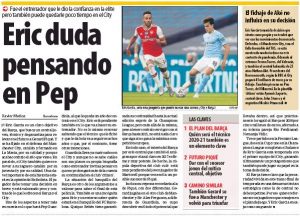 The managerial situation at Barca is also uncertain because Quique Setién’s future after this season is unclear.

García will also have to take this into consideration, if he decides to leave City and return to his old club.