Barcelona players are becoming increasingly excited the Coutinho saga is going to come to a positive conclusion, and the now Liverpool player will be a great addition to their squad.

That’s according to Catalan newspaper Sport who, on Thursday, talk the transfer up as being close to happening. Coutinho arriving at Barcelona is now described as ‘more than likely’ by Sport, and it’s explained there’s been an ‘outbreak of optimism’ among the club’s players.

Just to celebrate things a little further, Sport say Barcelona’s stars are ‘convinced’ Coutinho will take the team up several notches, given what he’s already shown with Liverpool.

Barcelona’s squad have been so convinced by Coutinho that several of them are said to have pressured the club’s president into making the Liverpool transfer happen. 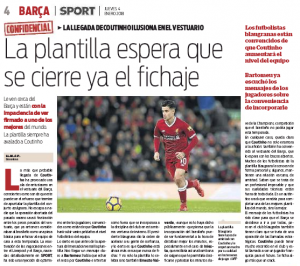 It’s thought the move is now ‘closer than ever’, and Sport say Barcelona’s players wait ‘with open arms’ for a transfer which is now presented as being imminent.

Of course, that all depends on Liverpool.